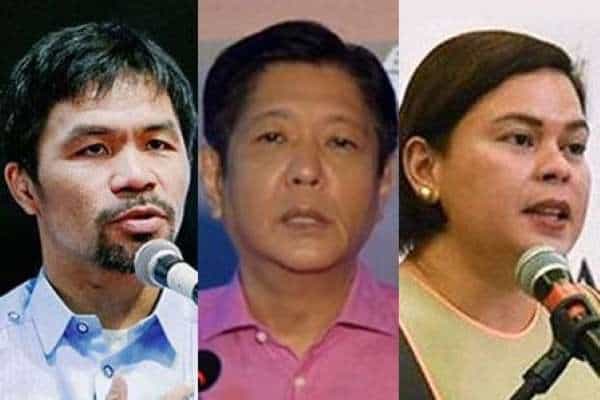 For Filipino online gamblers, the betting season is – in many ways – just getting started.

Yes, the 2021 PBA Philippine Cup has come to a close with favorites TNT Tropang Giga defeating the Magnolia Hotshots four games to one, but the NBA betting season is ramping up.

And while American football isn’t the biggest gambling sport in the islands, NFL betting is plenty popular, and there’s lots of weekly intrigue there.

However, the most intriguing betting line is that for the 2022 Philippines Presidential Election.

Indeed, you’ll find odds for the next Philippine President at just about every major PH-friendly online sportsbook site precisely because PacMan is part of the race.

A more beloved international athlete there isn’t, and because the best election betting sites are also huge sportsbooks that offer boxing lines for just about every contest, the overlap in action is sure to be incredible.

But the race itself is shaping up to be just as incredible.

The last time we reported on the Philippine election odds, Pacquiao was the favorite by a healthy margin, with Davao City mayor Sara Duterte-Carpio trending in second.

Those odds have now changed as the field has been more or less finalized with a whopping 97 different candidates vying for the top seat in Philippine politics.

Here’s the latest series of odds featured at both BetOnline Sportsbook and SportsBetting AG:

Here’s how each Presidential candidate’s odds have fared over the last three weeks since we previously covered the proceedings:

As you can clearly see, former Senator Bongbong Marcos – son of former Philippines President Ferdinand Marcos Sr. – is now the favorite to win.

The Western media has an unfavorable view of the erstwhile Marcos presidency, but it also called Donald Trump a “dictator” during his tenure in the US, so the characterization is potentially dubious.

Plus, we don’t presume to know the intimate feelings of Filipino citizens during and after the Marcos years regarding that administration.

Clearly, however, the current electorate is bullish enough on his son that he’s the overwhelming favorite.

Perhaps “overwhelming” is too strong a word. Marcos is only leading Pacquiao by 105 points, which – in sports betting – isn’t a particularly large lead.

However, the lead feels larger than it probably is – hence, it feels “overwhelming” – because just three weeks ago, Marcos was trending at +1500 and has made up 1425 points on the betting boards in such a short time.

Marcos is the candidate of the PFP party, which is strongly aligned with current President Rodrigo Duterte’s PDP-Laban party.

Meanwhile, the actual PDP-Laban standard-bearer – Sen. Ronald dela Rosa – only recently entered the fray, taking his party’s nomination from Pacquiao, who is now running under the PROMDI banner.

However, there are plenty of rumors and whispers that dela Rosa is actually serving as a sort of placeholder for Duterte-Carpio.

As you can see, the daughter of the current President has slipped by 775 points on the odds boards, but there’s a big caveat: She’s the only candidate listed that’s not technically a candidate.

While Mayor Sara has filed for reelection as the head of Davao City, she has until November 15 to withdraw her mayoral candidacy and enter the Presidential election.

If she does that, all polling and most Philippine political analysts say she’d be the favorite by a mile.

For sports bettors, the current lines are a bit of a conundrum.

In other words, bettors are being asked to effectively place a parlay bet on two outcomes, here: Duterte-Carpio must announce her candidacy for President, and then she must win the 2022 election.

However, if you have a few dollars to take a flyer, there’s no better wager to make with this set of lines.

We don’t know exactly what to expect, of course, as Duterte-Carpio – while extremely popular now – shows no signs that her popularity will wane anytime soon.

Philippine Presidents are term-limited to just a single six-year stint, and Duterte-Carpio is just 43 years old. She can afford to continue on as Davao City mayor and then make a push for President in 2028.

That’s an indicator that she might indeed wait for the next cycle to make her move.

On the other hand, dela Rosa himself has indicated that his purpose is to give Mayor Sara the flexibility to come in at the last minute and run with the PDP-Laban nomination.

On October 11, the Manila Bulletin reported the following:

“Dela Rosa, who surprised the public when he formally filed his certificate of candidacy (COC) last weekend as PDP-Laban’s standard bearer, said he is ‘very much willing’ to withdraw his bid, citing that the Davao city mayor’s winnability and her capability to lead the nation is higher than his.

‘Willing ako. I am very much willing kasi yung winnability niya masyadong mataas and yung kanyang (because her winnability is high and her) capacity to lead is beyond question,’ Dela Rosa said in an online interview.

Dela Rosa also said he is ready to support Duterte-Carpio even if she runs under another political party.

‘But I have to wait for the decision of our party kung mag-withdraw ako or hindi (if I will withdraw or not),’ he said.”

So, there you have it.