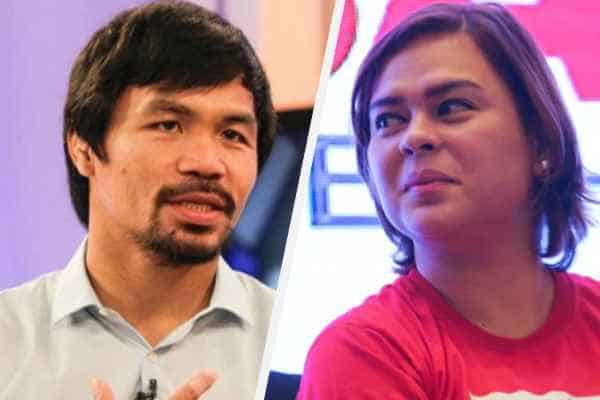 According to President Rodrigo Duterte, the PDP-Laban majority party ticket for the 2022 Philippines Presidential election is a go for Sara-Go.

Just a week ago, it seemed for all the world that President Duterte – who is term-limited and cannot run again for the government’s highest seat – would be the overwhelming VP favorite in next year’s May election.

However, Duterte abruptly withdrew his 2022 Vice Presidential candidacy on Saturday, citing the will of the Filipino people.

With that, the party formally nominated Sen. Bong Go for its VP spot.

But in addition to the above, the implications of Duterte’s retirement are that his daughter – current Davao City mayor Sara Duterte-Carpio – would now be running for President.

Previously, Duterte-Carpio announced that she would not be running for the post, as the family decided that only one of them would represent the country at the national level in 2022.

With Duterte out, of course, his daughter is now free to run without any perceived conflicts of interest.

Whether or not she will decide to do so remains to be seen.

Indeed, on Monday, Duterte-Carpio indicated that she intends to run instead for reelection as mayor of Davao City, for which she has already filed the necessary paperwork.

Additionally, per Reuters, she has openly rejected the idea that she’d now run for President of the Philippines.

“Duterte-Carpio, 43, has said she will seek re-election as mayor of Davao, the Philippines’ third-largest city, but she is allowed under election rules to withdraw and register for a different position until Nov. 15.”

“Mayor Sara has no intention of becoming a member of PDP-Laban or of being its standard bearer now or in the near future.”

That seems pretty cut and dried, but politics never is.

While she seems opposed to running under the PDP-Laban banner, her own regional party – Hugpong ng Pagbabago (HNP) – is a regional “affiliate” of PDP-Laban.

In other words, there’s no party conflict, here.

And as stated above, Duterte-Carpio does have until November 15 to formally declare her candidacy.

If you’re a Filipino sports bettor, then, you have a lot to think about.

While Sen. Manny Pacquiao is the most famous name on the 2022 ballot, most potential candidates have yet to declare.

From the odds below, you can see how that’s playing out on the betting boards at the top legal online Philippines gambling sites.

Will Manny Pacquiao be elected Philippines President in 2022?

The odds in parentheses above are where these lines stood just yesterday, and incredibly – despite the fact that Duterte-Carpio polls better than any potential Philippines Presidential candidate, including Pacquiao! – PacMan has become an even bigger favorite.

Part of this may be due to the fact that PDP-Laban has already nominated Pacquiao for President.

But again, things can change.

And given Duterte-Carpio’s popularity, should she declare, it’s all but assured the party would rescind Pacquiao’s nomination and give it to Duterte-Carpio.

Again, this is what the President himself has indicated.

So, if you think that’s likely to pan out – if you think “Sara For President” is going to be a thing, you have a great opportunity to earn a fantastic payout.

Currently, Duterte-Carpio’s chances are trending at +225, and it’s hard to envision her odds getting longer.

If you want to maximize your winnings on this line – and if you think she’s a lock should she declare – it’s worth placing a bet ASAP.

Another interesting point to note is that the two betting lines above are incongruent, which is a rare development in its own right.

In the former, Pacquiao is the literal favorite to win the Philippine presidency at -165. In the latter, he’s a heavy underdog – by 40 points! – to win the seat.

We’re not sure where that particular disconnect comes from, but your choices are clear:

And while you’re at it, you should also think about placing a wager or two on the 2022 PBA Philippine Cup playoffs.

The finals are just around the corner!