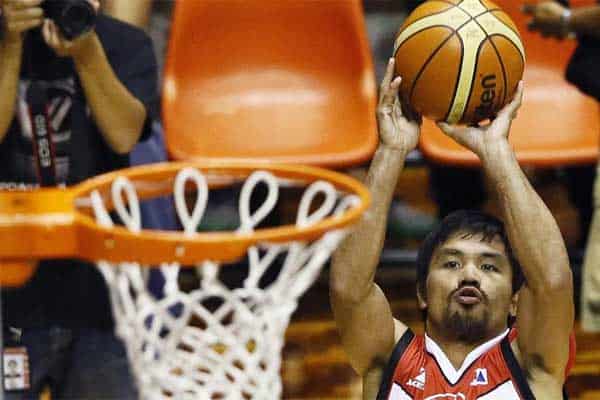 When asked if he would run for President of the Philippines one day, Pacquaio responded that he was not thinking about that right now, but he also did not rule the possibility out.

One thing few outsiders know about Manny Pacquaio is his love for basketball. While most of the world has seen him throw a counterpunch, very few people have seen his step-back jump shot in comparison.

Contrary to popular belief, Manny is such a huge basketball fan that he even helped create a league in the Philippines. Pacquaio launched the Maharlika Pilipinas Basketball League (MPBL) in August 2017, and the league played their first season in 2018-2019.

Recently Pacquaio has made headlines in the Senate with his push to rid Philippine basketball leagues of game-fixing. Joined by Philippine Basketball Association (PBA) chairman Ricky Vargas and league commissioner Willie Marcial the group discussed plans to eliminate game-fixing. They also expressed their concerns about how game-fixing was tarnishing the sport and leaving the leagues with a bad reputation.

Commissioner Marcial said they (Duremdes, Pacquaio) talked about co-existing and insisted that they are both out to help aspiring Filipino basketball players reach their goals while creating a platform for millions of fans to enjoy the game of basketball.

Basketball betting has been popular in the Philippines since the sport was first introduced in the early 1900s. Today Filipinos have multiple ways they can bet on basketball games but are limited to offshore sportsbooks to bet on Filipino basketball leagues.

Since Philippine gambling laws prevent residents from betting on local sporting events, NBA basketball betting has become a popular league to bet on. You can also find Olympic basketball events and FIBA odds on the offshore sports betting sites.

Pacquaio and the PBA are expected to have more meetings to hammer out the details of how the two leagues intend to fight illegal game-fixing in the future.