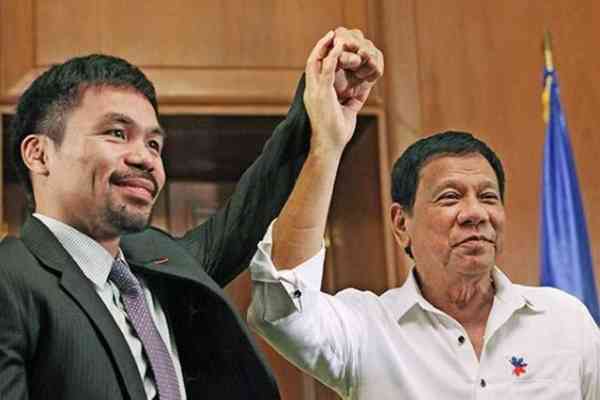 And while the fight went the distance and was reasonably close, Pac-Man lost via unanimous decision.

Of course, before the fight, many pundits – both boxing and political – framed the contest as something of a precursor to Pacquiao’s Presidential run in 2022.

Win, and his chances to be elected to the nation’s highest office would improve dramatically.

Lose, and defeat at the polls would be all but assured.

Of course, that was just the pre-fight hype.

Seemingly every sports outlet ran with the premise, but it clearly has no basis in reality.

In the Philippines, Pacquiao is a heralded national treasure. (He’s a popular Senator, too, remember.)

And boxing fans in the islands aren’t of the fair-weather variety, either.

Sure, Pacquiao is a global superstar and boxing hall-of-famer.

Sure, he’s arguably the greatest to ever lace ‘em up.

But more than that, he’s the country’s native son.

Pacquiao is Filipino through and through, and he’s beloved for what he’s done for the country’s most popular sport over the last two decades far more than he could ever be hated for losing a close fight to a much younger, much larger competitor.

Did Philippines bettors lose money on Manny this Saturday?

Well, he was a -400 favorite at most legal Philippines sports betting sites, so yes, many of them did.

Do they hold it against him?

In fact, the dramatic majority merely hope and pray he doesn’t retire yet, that he’ll keep fighting forever.

And that right there is probably the biggest thing going against him as he prepares to run for President of the Philippines next year.

If Pacquiao does indeed win the 2022 Presidential election, he won’t be able to fight anymore.

By the time he takes office, he’d be 43 years old, and Presidential terms in the Philippines last six years.

While it’s conceivable that Pacquiao could be the first active professional athlete-President in the history of ever – and while the PPV bouts would be that much more lucrative with such a ludicrous storyline powering each one – the state of the world today would leave Pac-Mac with little time to train and fight.

It would be an amusing “dual-sport” scenario to be sure, but it would be highly unlikely.

The real question, then, is whether fans in the Philippines want Pacquiao to lead their country or whether they want him to keep bringing the entertainment in the squared circle.

It probably can’t be both.

If Pacquiao intends to win this thing and topple Sara Duterte-Carpio at the polls, he’ll have to bow out of the ring.

And that might actually sour some of the electorate.

Of course, it’s probably all academic.

Pacquiao is considered very much a challenger to President Rodrigo Duterte’s popular daughter, and he’s already a sizable underdog in the country.

Couple that with the fact that the outgoing President is an overwhelming favorite to be elected Vice President (making a Duterte-Duterte 2022 “ticket” even more formidable, a la Trump-Trump 2024 in the USA), and Manny could be the odd man out.

Nevertheless, whatever he chooses to do, he’ll have his tens of millions of supporters.

As big fight fans and Philippines boxing betting enthusiasts ourselves, of course, we’re definitely not ready to see Pacquiao pack it up.

Still, whatever happens, it’s sure to be intriguing, and there are sure to be plenty of betting lines at Philippines legal sportsbooks like 22bet and BetOnline.

So be sure to stay tuned, because as soon as the official Philippines election odds get posted at any reputable venue, we’ll fill you in on all the details.